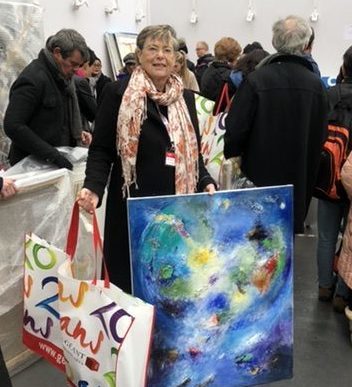 Workshops in Sweden (Öjetorp) and in Paris (14e)

Former university teacher of languages and literature. PhD in French Literature in 2001 at the University of Lund in Sweden. Between 2004 and 2012, managing director of the Swedish Student House at Cité internationale universitaire de Paris.

Started painting watercolour in Stavanger, Norway in 1989 and, above all, in Copenhagen in the nineties. Took up painting again in 2007 in Paris with the group SWEA ART and  participated in many SWEA ART exhibitions (2007-2014, in Paris, in Brussels, in London and in Sweden). Exhibited at the Salon du Printemps of the Swedish Art Association in Paris between 2008 and 2014. The Brussels exhibition was also shown twice at computerized art performances in China in 2008 – pictures and text reading. Exhibited at Illzach (Mulhouse) France, “L’Art au Coeur de l’Europe”, between 2009 and 2014 (Honorary Guest Artist in 2014). In March 2013 at “Galerie Mouvances” Paris; in Oct 2013 at “Galerie Etienne de Causans”; rue de Seine, Paris;  at Grand Palais Paris “Art Capital” between 2009 and 2020. Swedish Art Biennial of Contemporary Art “Séductions suédoises” at Nice Airport: Dec 2013 – Feb, 2014 – see “Exhibitions” for details.

Wins “La Toile d’Or 2013” awarded by the National Federation of French culture (FNCF) for the work “In Lingonberry Time”,” exposed at the exhibition “Art en Capital” at the Grand Palais in Paris in December 2013 (see “Page 2”) and “La Toile d’Or 2015” for “The Wave of Time” (see “Page Home” at the bottom of the page).

Works in watercolour, pastel, acrylics and oil, mainly inspired by nature, its mystery and hidden forces, and the origin of man.

Question often asked: “How do you create a work of art?”
Vivi-Anne: “It can be a sudden inspiration, something I experience or see: the atmosphere of a landscape, a meeting, a movie, a poem. Everything that affects me emotionally. It may take a long time before I feel ready to start the interpretation, to sink into the feeling I want to convey. Creating a painting requires full commitment, rarely easy, one has to have the courage to go out on unknown roads, go beyond the well-known, to experiment, be prepared to start all over again. When it succeeds, it’s a lovely feeling!
I am often inspired by nature, our different seasons, different times of the day, different weather, sky, water, fog, wind, rain, storm, sunshine. There may be flower beds, meadows, lakes and forests, the sound of streams in the spring.”